After upgrading to 6.8.1, magicspam had problems, the settings screens and other details no longer load completely. See image. What can we do? 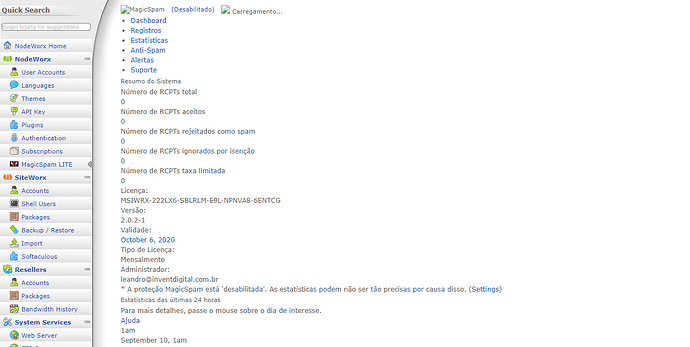 However, if you open a support ticket and ask very nicely, IW may help you to resolve your plugin

If you did not write your plugin, you may want to ask the creator for help

I don’t have a test server with Magicspam setup so I cannot confirm if this is an update issue or something else. Please contact their support. I have a contact email for the company too and will get in touch also, in case they need some assistance from us to troubleshoot.

We did not manage to replicate the reported issue on our internal InterWorx server running version 6.8.1-1801. So it might have something to do with the InterWorx upgrade process, we will continue investigating that possibility.

In the meantime, would you please try reinstalling MagicSpam on your system by running the following commands from the command line as the ‘root’ user:

Please install the appropriate MagicSpam installation package for your system. In the example above, the system would be running Redhat7 64-bit.

Thanks for the update, MagicSpam!

If your still having issues or this happens again please open a support ticket and let me know. You can enable remote assistance and I’ll work with magicspam to see if we can figure this out.

So far no one else has reported the same issue, but if anyone reading this does please let us or magicspam know. Even if the reinstall fix’s it.